I may never fully understand my love for audio interfaces. At the end of the day they're just devices that do a better job of recording and playing back music than the built-in audio of most computers, but I almost spend more time experimenting with and writing about them than I do using them to make music. I have done interface performance tests several times before, but that was all on Windows 7 (and mostly on a now-10-year-old DAW PC), so I was recently curious how well some of today's USB audio interfaces perform on a newer computer with the latest version of Windows.

Audio interfaces are audio streaming devices, and on modern operating systems all streaming is "buffered" or "packeted." Rather than truly sending a constant binary stream of audio data, your computer bundles up tiny chunks of audio into separate data buffers that are reassembled at the destination end of the stream. This buffering introduces some amount of latency; that is, the fact that the audio data is buffered means that there is a small amount of built-in delay between when the audio data is first transmitted by one device (an audio interface) and received by another (your computer).

There is some amount of latency in both an interface's input and output audio path, and round-trip latency (RTL) is the combination of both of those times. RTL is the metric I tested for: What is the total amount of time an interface takes to send and receive audio given certain settings?

A latency measurement is only meaningful if you know two other values: Sample Rate and Buffer Size. The sample rate is the number of samples per second the audio stream is encoded at, and the buffer size is the number of individual samples included in each streaming buffer.

When you record at high sample rates, your computer processes more audio data, which usually requires larger sample buffers in order to handle audio as reliably as at lower sample rates. The buffer provides protection against glitches (pops and drop-outs in the audio stream), and the harder your computer is working, generally the bigger the buffer you need for glitch-free audio.

The trade-off (and the reason we're studying this at all) is that too big of a buffer at a given sample rate can result in such a great delay that it can become difficult or impossible for a musician to keep in time with the rest of the music while attempting to sing or record. When shopping for audio interfaces, it's good to know which devices offer you the lowest reliable round-trip latencies at given sample rates and buffer sizes.

Not all interfaces perform alike. There are many factors that contribute to interface performance, but the most important appears to be driver quality. A driver written for a specific device with efficiency and optimization in mind can significantly outperform a less optimized driver on similar hardware.

For my tests, I used a free tool called RTL Utility, by Oblique Audio. With this tool, you patch your audio interface's outputs to its own inputs, forming an audio loop, and measure the time it takes for a full output->input round trip at a given sample rate/buffer size.


The Devices Under Test

I have bought and sold many interfaces over the years. These are the ones that I still own and used for these tests. 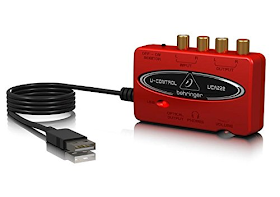 The U-Control UCA222 is a very low-cost interface with unbalanced RCA-style analog connectors that's designed more for consumer audio applications than for music production. I bought one so my wife could create digital recordings of her old cassette tapes. 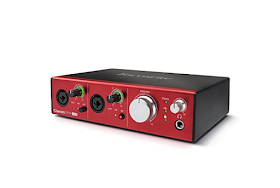 The Clarett 2Pre USB is a desktop interface with high-quality preamps and sophisticated routing/mixing technology. Mine serves as an external DAC for a computer I mostly use for multimedia purposes. 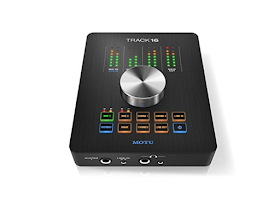 The Track16 is a small desktop interface that pushes most of its I/O connections out to a giant proprietary octopus of a breakout cable. On hot summer days, I choose to use this device with headphones rather than powering up my full production rig, which generates a ton of heat. 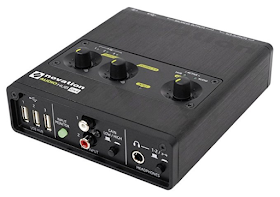 The Audio Hub 2x4 is a 3-port powered USB hub with Focusrite Scarlett audio interface technology inside. I frequently use this device for recording/sampling audio sound sources, and I use its USB ports to host eLicenser/iLok dongles.

The Fireface UFX is a prosumer legend, offering tons of analog and digital I/O with top-tier performance, reliability, and flexibility in a single rack space form factor. This is my primary interface for writing and recording.

The Duo-Capture EX is one of my favorite entry-level interfaces, just because it packs a lot of features into a small, reliable and affordable package. I don't actively use my Duo-Capture these days, but I keep it around for testing and ad-hoc stuff. 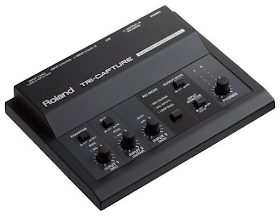 The Tri-Capture is an odd little device with an interesting combination of features at a low price. I have used this for recording/sampling from consumer audio devices.

For this round of tests I used my current DAW PC on the most recent build of 64-bit Windows 10. The current specs of this system:
In order to keep the playing field level, I used the same USB and audio cables for all tests, where possible. (Some devices had special I/O connectors that required different cables.) I ran multiple tests at each sample buffer size for each device and selected the best/lowest test results from each device/buffer size combination.

In cases where the test results seemed surprising or unexpected, I re-ran all tests on the device in question to ensure results were consistent and reproducible.

The purpose of these tests was only to determine the measurable RTL of each device at each sample buffer size; not to establish the most reliable low-latency sample rate/buffer size combo under heavy DSP loads. (See the official DAW Bench tests for that sort of thing.)

I ran latency tests at four of the most common buffer sizes, all at a sample rate of 44.1kHz. Some quick notes before we get to the raw data: 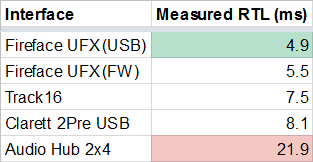 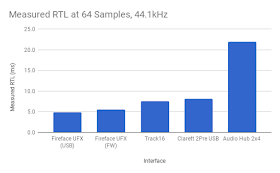 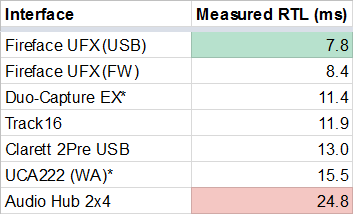 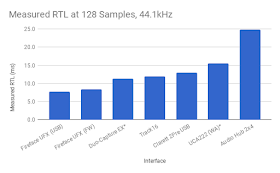 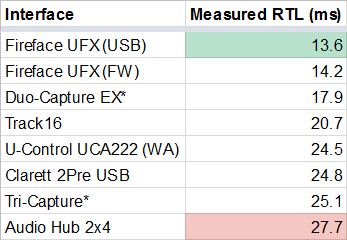 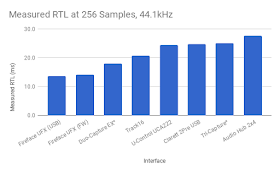 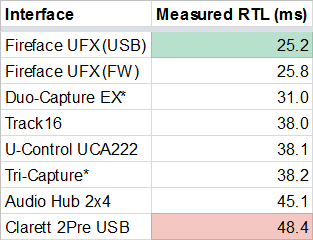 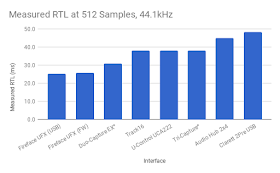