In 2016 Nintendo released the NES Classic Edition, an adorable miniature replica of the Nintendo Entertainment System that connects to modern television sets and plays 30 iconic NES games. With an asking price of a mere $60 USD, the thing became a must-have among classic gaming enthusiasts- but Nintendo grossly underestimated demand. Any units that made it to store shelves sold out instantly (usually to scalpers who resold the consoles online at three times the cost), making Nintendo's most popular console in years their hardest to obtain at anything approaching a reasonable price. Nintendo then applied gasoline to the fire by discontinuing the NES Classic Edition altogether in early 2017.

Somewhat heartbroken by the reality that I would never get my hands on one of Nintendo's mini consoles (since I refuse to give scalpers my money), I started looking for alternatives- and I quickly discovered that for not much more money than the original retail price of the NES Classic Edition I could build my own mini NES that played not 30 but 791 NES games- and could also play over 14000 additional games from 37 platforms other than the original Nintendo Entertainment System. So I built one, and now I'm gonna show you how to build your own.

HOW IS THIS POSSIBLE?

Our ability to make super-cheap purpose-built classic gaming devices is thanks to the Raspberry Pi Foundation, a non-profit organization who developed a computing platform with the goal of making it inexpensive and easy to learn how to make digital products. The Raspberry Pi is a single-board computer that runs a (usually Linux-based) custom operating system, often with a specific purpose. In our case, we'll be using a gaming environment called RetroPie that runs on top of a special Linux build created for the Raspberry Pi.

If you're not a "computer person" or a Linux expert- don't worry. The following instructions will walk you through every step of the process. But for those of you who are interested, the system we are building is based upon the following technologies:

In order to follow these instructions, you will need the following items:

Depending on which controllers you pick and whether or not you decide to include a wireless keyboard, the cost of building your own fully-functioning supercharged mini NES runs anywhere from $110 to $194 USD- which is less than most people are paying for the 30-game NES Classic Edition on eBay right now. Here are all the individual components you need:


ABOUT THE RETROPIE IMAGE I USE

I'm using a RetroPie image called "Nacho's Image" that comes pre-configured with nearly 15,000 games for 38 different consoles and platforms. The image requires a microSD card that's at least 64GB in size. Here's a quick rundown of the image's contents:
Is this stuff legal?
There is no single clear answer on whether it's strictly legal to share and/or use the classic game ROMs included in this image or available elsewhere on the internet. In the United States some of these game ROMs are covered by Fair Use doctrine in the sense that if you own the actual physical cartridge or arcade cabinet you're allowed to keep and use back-ups of those ROMs as you please. But at the end of the day, many of the companies that made these games don't exist anymore, and there is no way to legally purchase the majority of these games in the USA or anywhere else. Most of these titles are essentially abandonware. You can easily remove individual games you're not sure about from the image as needed.

DOWNLOADING AND PREPARING THE RETROPIE IMAGE


In order to download the Raspberry Pi image, you need a BitTorrent client that supports magnet links, and you then need a way to write the downloaded image to your microSD card. There are dozens of free torrent clients and image burning tools for all major operating systems. I will recommend some specific tools I've used on Windows and Ubuntu Linux.

Recommended Programs
All of the utilities I use for these steps are free, and two of them are available for Windows, Mac OS, and Linux. My instructions assume you're using these tools.
Instructions (for Windows, Linux, and Mac OS)

Hardware setup is the fastest part of this whole project. To reduce the chance of damaging your Pi via electrostatic discharge, try to work on a clean, flat surface in an area with a hard floor instead of carpet.

Now that you've got your image burned and your device assembled you're almost ready to play some games.

EmulationStation is designed to be fully controllable with your game controller. You only need a keyboard (and sometimes a mouse) for specific emulators, or for doing Raspbian or RetroPie configuration.

Note: Some of these steps require that you have a USB keyboard connected to your Pi!

Jittery video and audio at first-time use
The first time you connect your Raspberry Pi to your television and start up a new image, it can take a few minutes for the device to completely configure its video and audio settings. So you might notice some flickering video or choppy audio for the first few minutes that you use the system. This should clear up automatically after a short while. If it doesn't clear up, you might need to change some settings in the RetroPie configuration screen.

No audio when connected to an HDMI television set
First off, you should always make sure your TV is powered on and has the right HDMI port selected before powering on your Raspberry Pi. (If you turn on the TV or select the input port after the Pi has booted, the Pi might not detect your TV's audio connection.) Try doing this first (rebooting Pi after the TV is already on and selected) before continuing with the next steps.

The default settings of this image support most HDMI TVs, however some televisions use a different way of "presenting" their audio inputs to connected devices in a way the default RetroPie settings don't recognize. I have had to make the following change in order to get RetroPie to work on one of the TVs in my house.
Game doesn't work as expected
While most of the games in this image work great, there are a few that simply don't work, and others that might have special requirements. Here are some things to check and/or keep in mind if a game isn't working as expected:
Stop playing the "Nacho's Image" video every time the Pi starts up
If you'd like to skip the video that plays by default every time this image boots up, you can change this in the RetroPie settings. Note that these settings require a USB keyboard attached to your Pi.
Enabling WiFi networking
While you do not need to connect your Pi to a network in order to use the preconfigured games in this image, you might want to enable Wi-Fi networking in order to remotely administer and customize your device. There is already a pretty good post about how to do this at the RetroPie site.

Note: When the RetroPie documentation talks about "the Retropie menu in emulationstation" they mean you use the left/right controls on your D-Pad to select RetroPie as if it were a console/platform: 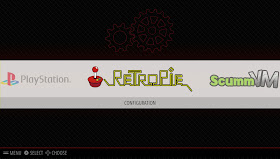 And when you press A from there, you see this menu: 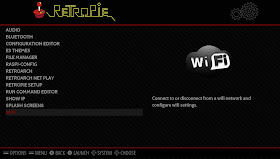 Important: Enabling Security on your Raspberry Pi
Although recent versions of the Raspian OS disable SSH access by default, I have noticed that it is enabled in the RetroPie image that I use. If you never connect your Pi to a network, this isn't a big deal, but if your device is connected to either your Ethernet or Wi-Fi networks, this is a potential security risk. To protect yourself, you should either disable the SSH feature if you're not going to use it or change the device's default password so your device can't be easily overtaken by a scripted attacker.

The raspi-config tool included with Raspian is where you can disable/enable SSH. You can get to it from a command line by exiting EmulationStation and running this command:

You can also access it by selecting RetroPie from the main EmulationStation screen and choosing the "Raspi-Config" option from the RetroPie menu. You control the SSH setting inside the "Interfacing Options" screen of raspi-config. This page explains the process in detail.

You should also change the default password of your device if you ever plan to leave it connected to a network. If you're familiar with the Linux passwd command, you can use that. Otherwise you can use the Change User Password option in raspi-config to do this.

(The default username in Raspbian is pi and the default password is raspberry.)

I hope you found this guide helpful. Game on!